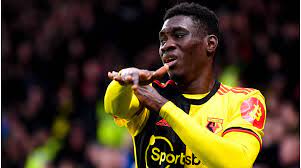 EPL current champion Liverpool are back to the transfer Market likely to sign another player before the Market closes by October and Analyst are saying that they are in the market for their fourth signing which is Ismaila Sarr from Championship side Watford.

Based on club report saying that the Senegal international joined watford for  a club-record £30m fee from Rennes last summer and he was able to register five goals and six assists across all competitions in the season with the club.

Although since their relegation from the Premier League, he has been eager to pursue a fresh challenge and media houses claim that Liverpool are in negotiations with the Hornets to finalise his transfer to the Red.

It must be noted that the Merseyside giants Liverpool have made three signing which are Kostas Tsimikas,Thiago Alcantara and Diogo Jota with the fourth signing coming into play now.

Based on formation we know that Jota will enhance their attacking depth for the campaign, but they are still interested in landing the services of Sarr from Watford. According to report the Reds are planning to meet the Watford £36m price tag, but may only be willing to pay in instalments if the deal must pass through.

Football scout are saying that Watford are in no rush to part ways with the Senegalese winger, but they might sanction his sale in the coming days such that they can reduce their wage bill as they are already in second tier.

No matter what happen in these deal it is believed that Liverpool is really interested in the player as they feel his position will help in the attacking side for the team.

newsaffairng - March 23, 2022
0
Load more
Newsaffairng is a joint venture of great people of like mind and friends who see news in their area as important as the food they eat. The story of our love for infrmation and News was mainly for those who believed that there is no news that is complete until is ready by all.Packed with statistics,fact,figures and insight knowledge of some area(sport,Health & Tech) needed by people to get awareness we hope to provide our reader/viewers something different from the usual. It was designed,developed and maintained with one thing in mind which is to bring to his viewers a first class information on areas of Sport,Health,Technology and general news from the horses month. Newsaffairng is born to provide exclusive player and manager interviews of football and providing viewer/fans with current features,match preview analysis,Technology update and health news etc. Newsaffairng is working on employing a large number of dedicated team of staff editors and freelance reporters to add to the few we have so that they can produce rich content around the world.Both editors and freelance are scattered over the continent with good knowledge of sport(football),Health and Technology. We cover a wider range of topics which have made our reader able to enjoy what we have to offer.
Contact us: Justnewsaffair@yahoo.com