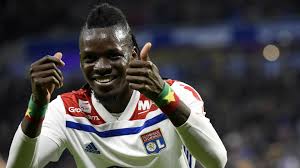 Premier league side Aston Villa have finally sign lyon forward Bertrand Traore on a four-year contract after agreeing a deal worth around £17m plus £2m in add-ons for the established player.

It was also  noted that Lyon man Traore who is well known by Villa coach John Terry from his time at Chelsea becomes their fourth major signing for the new season before the window closes.

Although Aston Villa have already broken their transfer record to signing Ollie Watkins from Brentford on a five-year deal, while Matty Cash has also joined on a five-year deal from Nottingham Forest and goalkeeper Emiliano Martinez has arrived from Arsenal all for the season to be complete.

Club reporte shows that based on agreement, Lyon have decided to retain a 15 per cent sell-on clause on the 25-year-old, who has experience of playing in the Champions League for the French club last season, while he also scored four times in 32 appearances in all competitions.

Quoting Villa Boss Dean Smith saying “We’re delighted that Bertrand has chosen to come to Villa He’s a player with immense talent who will really enhance our attacking options.”

Club record shows that the Burkina Faso international joined Lyon from Chelsea for €10m (£9.2m) in June 2017 with great expectation and have scored 33 times in 126 matches across three seasons and also enjoying his most productive spell in his first season with 17 goals.

Although football analyst are saying that the signing is a major boost for Smith, who has revealed Wesley may not return from his knee injury until next year.

Based on report it was noted that the forward sustained a serious anterior cruciate ligament injury on New Year’s Day against Burnley and Smith has admitted the Brazil international is nowhere near a first-team comeback for now.

When asked on the player’s potential return, Smith said: “We believed it was going to be a 12-month injury and nothing has told us otherwise yet for now

“It was quite a bad injury he suffered. He’s back now with us but is not training in any shape or form yet.

Quoting him saying “He’s getting full range back into it and the swelling has gone down on his knee now. Hopefully he’ll be back as soon as possible.”

Having survived by the skin of their teeth, Aston Villa now have a platform to build on in the Premier League to enable achieve a better stay in the premier league.

While the feeling is that the club have got the hardest part out of the way already: Premier League survival in their first season back and they are doing everything to keep them back to the EPL.

Club statistics is saying that It was an odd campaign for Dean Smith’s Villa – big summer spending, lots of hope, then injury, tactical naivety and a lack of cohesion with all to see the team achieve better but in it valiant effort to secure survival on the last day. One thing is for sure, expectation at Villa Park is big and sure with the fans not expecting another dog fight. The focus on 2020/21 is build, build, build.

newsaffairng - July 13, 2022
0
Load more
Newsaffairng is a joint venture of great people of like mind and friends who see news in their area as important as the food they eat. The story of our love for infrmation and News was mainly for those who believed that there is no news that is complete until is ready by all.Packed with statistics,fact,figures and insight knowledge of some area(sport,Health & Tech) needed by people to get awareness we hope to provide our reader/viewers something different from the usual. It was designed,developed and maintained with one thing in mind which is to bring to his viewers a first class information on areas of Sport,Health,Technology and general news from the horses month. Newsaffairng is born to provide exclusive player and manager interviews of football and providing viewer/fans with current features,match preview analysis,Technology update and health news etc. Newsaffairng is working on employing a large number of dedicated team of staff editors and freelance reporters to add to the few we have so that they can produce rich content around the world.Both editors and freelance are scattered over the continent with good knowledge of sport(football),Health and Technology. We cover a wider range of topics which have made our reader able to enjoy what we have to offer.
Contact us: Justnewsaffair@yahoo.com

Benjamin not guilty of six counts of rape

Planning for PSG’s Mbappe and Neymar has kept me up at...