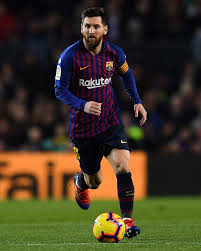 The six time Ballon d’Or Lionel Messi is strickly considering leaving Barcelona this summer after spending 20 years with the Spanish Giant with report saying that the Barca playmaker sent a shockwave around the football community by formally requesting for a transfer from Camp Nou.

It is believed that Manchester City who currently have the financial muscles to accommodate such high profile transaction is seen as the front runners to land Messi with the City Boss Pep Guardiola having previously coached the playmaker in Catalonia is seen as a better chance to grap the deal.

Similar report understands that Manchester City is strongly believed to be Messi’s preferred next destination although Laliga ruled yesterday that his €700million release clause must be met in order for a departure from Barcelona to be established.

Report from England is  alsosaying that Manchester City are reportedly willing to pay Barcelona forward Lionel Messi a contract worth £450m.

Manchester City is also including into the deal for the playmaker to stay untill 2023 before finally leaving to New York City FC.

newsaffairng - March 23, 2021
0
Load more
Newsaffairng is a joint venture of great people of like mind and friends who see news in their area as important as the food they eat. The story of our love for infrmation and News was mainly for those who believed that there is no news that is complete until is ready by all.Packed with statistics,fact,figures and insight knowledge of some area(sport,Health & Tech) needed by people to get awareness we hope to provide our reader/viewers something different from the usual. It was designed,developed and maintained with one thing in mind which is to bring to his viewers a first class information on areas of Sport,Health,Technology and general news from the horses month. Newsaffairng is born to provide exclusive player and manager interviews of football and providing viewer/fans with current features,match preview analysis,Technology update and health news etc. Newsaffairng is working on employing a large number of dedicated team of staff editors and freelance reporters to add to the few we have so that they can produce rich content around the world.Both editors and freelance are scattered over the continent with good knowledge of sport(football),Health and Technology. We cover a wider range of topics which have made our reader able to enjoy what we have to offer.
Contact us: Justnewsaffair@yahoo.com