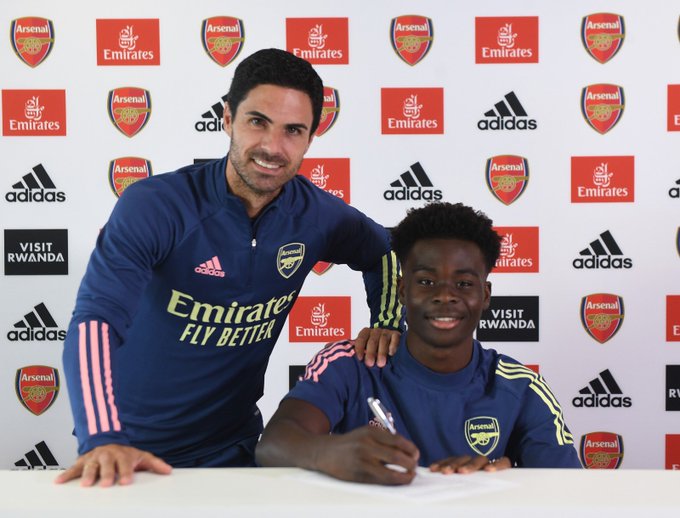 According to Saka’s tweet as monitored by Newsaffairng saying in his own word “Arsenal is my team. I’m so happy to to finally announce my contract extension.”

The respected 18-year-old England Under-19 international contract is believed to expire next summer and there are speculation that he might leave but a new deal have just been signed by him to enable him continue is stay with the Gunners.

Arsenals director of Technical Edu speaking in his own word concerning Saka’s new contract saying “This is so important for us as we move forward as a club”.
“This is something everyone involved wanted to happen and we are delighted that Bukayo has signed a new long-term contract.”

Quoting the 18-year-Old in his own tweet saying “London is my home. Arsenal my team. I’m so happy to finally announce my contract extension I love playing for this club and I’m looking forward to what the future holds.. The hard work continues so I can continue living my dream. God is Great !!

It must be noted that Saka who is a product of Arsenal academy has scored three goals and engineered 10 assists this season with a good skill display while playing on field.

newsaffairng - July 1, 2021
0
Load more
Newsaffairng is a joint venture of great people of like mind and friends who see news in their area as important as the food they eat. The story of our love for infrmation and News was mainly for those who believed that there is no news that is complete until is ready by all.Packed with statistics,fact,figures and insight knowledge of some area(sport,Health & Tech) needed by people to get awareness we hope to provide our reader/viewers something different from the usual. It was designed,developed and maintained with one thing in mind which is to bring to his viewers a first class information on areas of Sport,Health,Technology and general news from the horses month. Newsaffairng is born to provide exclusive player and manager interviews of football and providing viewer/fans with current features,match preview analysis,Technology update and health news etc. Newsaffairng is working on employing a large number of dedicated team of staff editors and freelance reporters to add to the few we have so that they can produce rich content around the world.Both editors and freelance are scattered over the continent with good knowledge of sport(football),Health and Technology. We cover a wider range of topics which have made our reader able to enjoy what we have to offer.
Contact us: Justnewsaffair@yahoo.com