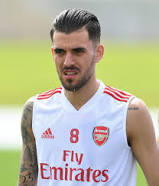 The Gunners have agreed to extend the loan deal of Spanish Midfielder Daniel Ceballos .

Similar media report as confirmed by us are saying that the Gunners have decided to prolong the temporary stay of the Spanish player until the current season is concluded.

With Cebellos and Matteo Guendouzi currently the best fit midfielder at Arteta disposal with the hope of playing them regularly.

Eric Garcia is set to join Barcelona on a free transfer...